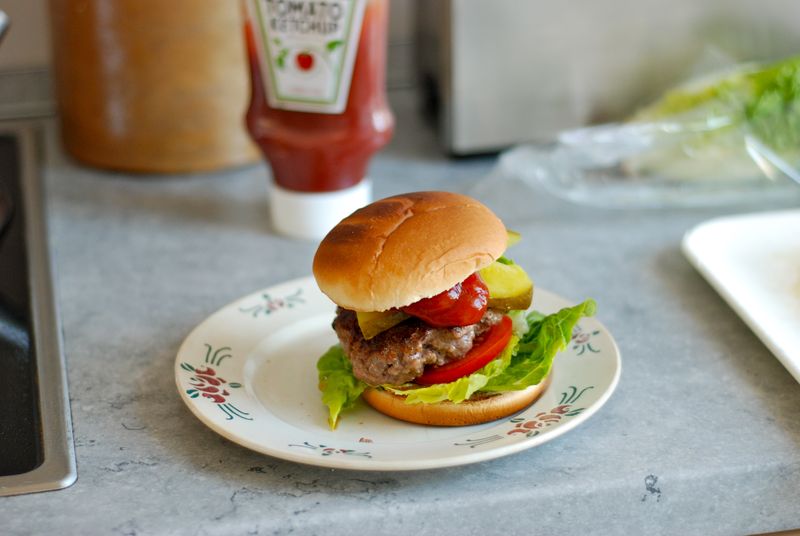 This is what things have come to over here. I decided that the anemia rendering me a black-eye-shadowed zombie needed to be given a swift kick in the you-know-whats and started adding ground beef to my daily diet of a double dose of iron supplements. The verdict? So far I am feeling slightly less catatonic and out-of-breath, though that could also have to do with the intravenous iron infusion administered to my left arm yesterday by my very tall, kind-eyed doctor. I enjoyed the first hamburger I made at home far more than I thought I would, though, so I've decided that it deserves at least some of the credit.

I'm in the home stretch, folks, the one where every minute of every day ticks by excruciatingly slowly. These last weeks are a kick in the head. I alternate between thinking about which appendage I'd gladly sacrifice to kickstart labor and staring in shock at the teeny-tiny clothes stacked on the bed in the spare, er, baby's room, awaiting their dresser, incapable of comprehending that a baby, our baby, will be inhabiting those very clothes sooner than I can imagine and wondering how to eke out more time in these last days of being just me.

So distracting myself with ground beef and how to structure a hamburger sandwich that will be my son's birthright as a German-American seems sensible, no? 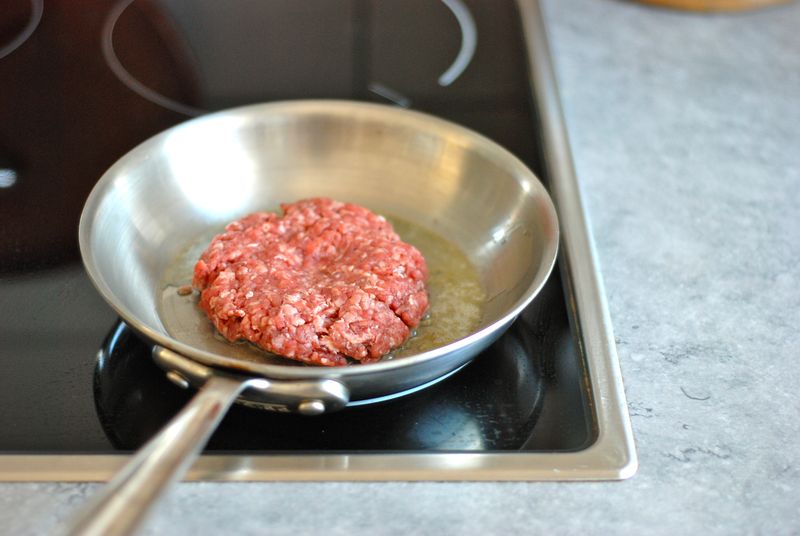 For the hamburger itself, I simply bought ground beef and added a bunch of salt to it before forming it into a single patty. I once read that when you make hamburgers at home, you should make a thumb-sized dip in the middle of each patty so that the burger doesn't swell up annoyingly while it cooks, rendering your sandwich even messier than it would be otherwise. (I know that really good burgers require more seasoning than just salt, but did I mention my zombie state? It keeps me from being able to page through cookbooks without my head hitting the table.) 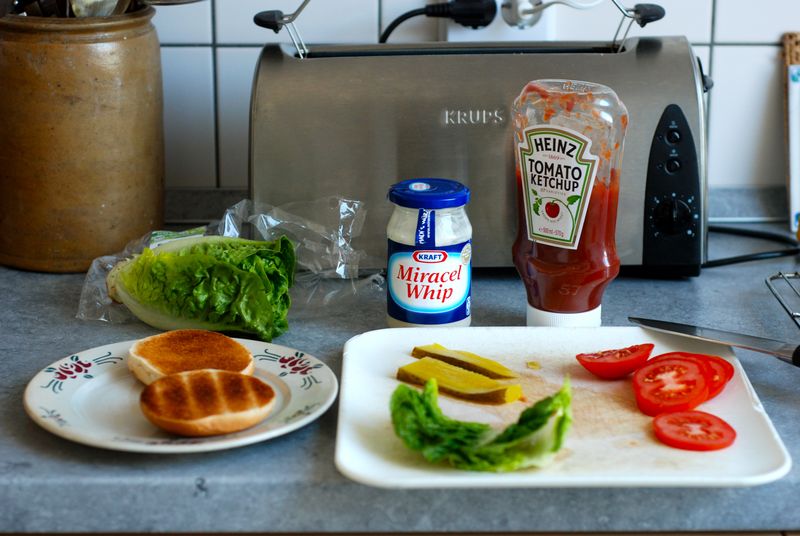 While the meat cooked in a little bit of melted butter in a pan, because I am grill-less and because I also vaguely remember reading once that if you don't have a grill, the next best thing is to fry your hamburgers in butter (where all these great burger tips came from, I don't know. Forgive me, o unknown food writer! Maybe I'll remember in another nine months.), I gathered the fixings for the rest of the sandwich.

Mayonnaise, for a very thin coating on the bottom bun.

Ketchup, the Holy Spirit of my refrigerator, the anointer of every hamburger ever to pass my lips.

And then I assembled. And ate. And perked up right away, like a bunch of flowers after getting their ends snipped and water replenished. I don't know how long I can keep up the hamburger-a-day routine (two days in a row and I'm feeling all meated out), but who knows. Max caught wind of the project and is now clamoring to be let in on the deal when he finally comes home. 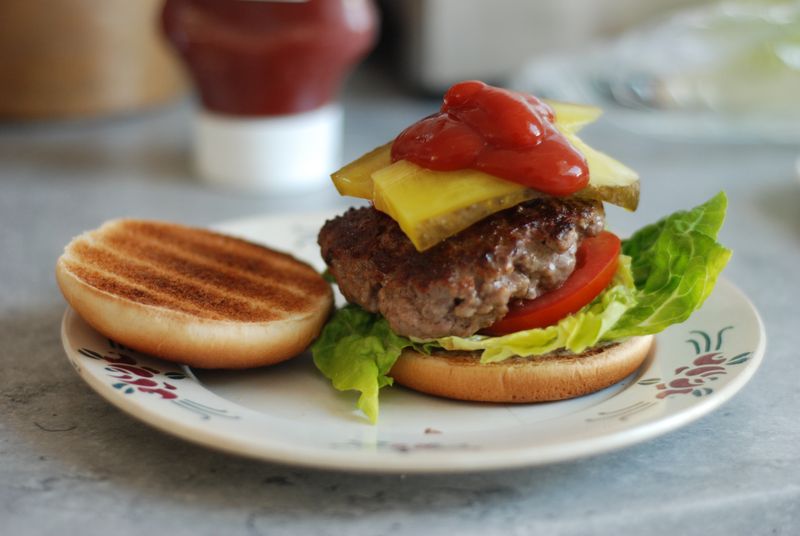 Yesterday I had to go to the hospital to drop off some paperwork and when I rang the bell of labor and delivery, a doctor in blue scrubs came out and asked me if I was the person scheduled for the c-section tomorrow. No, no, I stammered, I'm just here to drop these off and with that, I handed her the papers I'd brought. She smiled at me, took them and I left. Three steps down the hallway, I suddenly wondered what it would be like if I had indeed been that person she took me for. I imagined myself on an operating table the next day. Max next to me. A big sheet, a few tugs and, finally, someone handing me the baby. And suddenly I felt so overcome with longing that my lungs hurt. If I could have, I would have walked right back to the doctor and asked for an operation that instant.

So that's where I am, counting the minutes, the seconds, as they inch by, leading me towards the kid who's waiting for me, for us, just beyond what we can see or fathom. Soon, soon. Not soon enough. 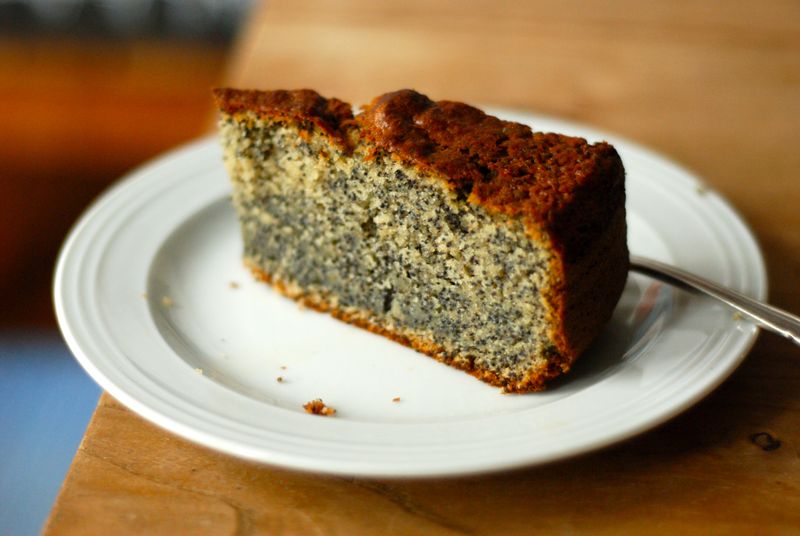 I am stuck. Completely and utterly stuck. I've had these cake photos sitting in this post form for two weeks now and every day I open it up to start writing and every day I close it again because I don't know what on earth to say.

How about this: This cake, it is good. So good! So moist. A little crunchy, too. Not too sweet. Perfect.

My friend Sylee made it for me a while ago, except, because she's Indian-American, she used white poppy seeds instead of black ones. We ate slices of it at her place after a lovely lunch of fava beans and crisped prosciutto on wholesome bread, along with a mug of milky tea. It was such a nice Friday afternoon.

The original recipe uses regular poppy seeds, all chalky and blue. I love the way they pop in the creamy-white batter. I like their slightly stony flavor and the way they taste embedded in the sour tang of the buttermilk batter, the faint whisp of vanilla floating behind them like a nimbus cloud. I like how the cake is almost juicy with moisture, how the top ripples and folds once it's baked. I like the way it makes the house smell.

And that's about it. 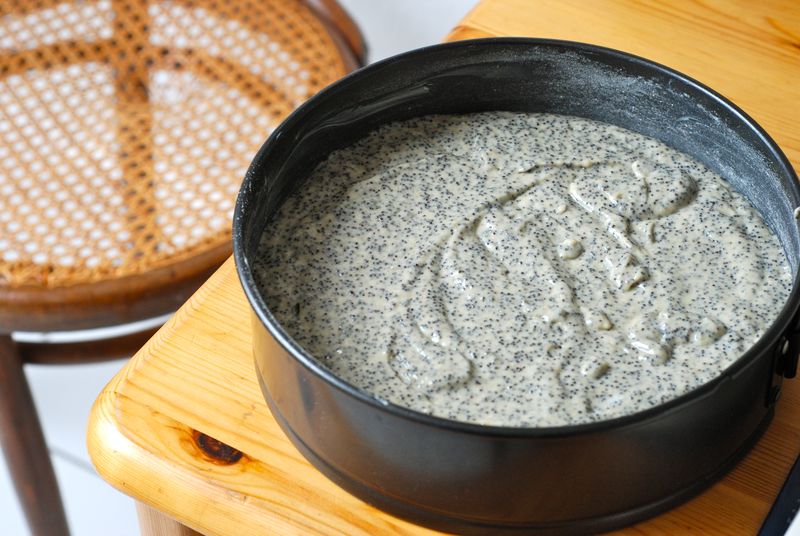 I've been so lucky so far - the baby is healthy and well, I am doing fine, there is absolutely nothing to worry about. And yet. As the gestation comes to an end, I find myself on the verge of anxious tears a lot. Some of it has to do with the annoying pelvic pain, some of it is because I miss my husband, who is working feverishly before he can take time off and come home before the baby arrives, some of it is because - utterly against my nature - I don't really have anything set yet. I know a baby doesn't need much, I know that we don't need to blow our paychecks at the baby store (trust me, we're not the type), but still, for my own peace of mind, I need to start dealing with the fact that we are still missing the most basic basics: enough clothes for the first few weeks, a changing pad, for cripes' sake, even just a few folded cotton cloths or towels.

Until I do that stuff, I'm afraid that ticker-tape parade of to-do lists and low-grade anxiety isn't going to go anywhere and I will lie awake at night as the rain hits the windows, feeling him bump and wiggle inside me, and worry. Which is silly, I know. 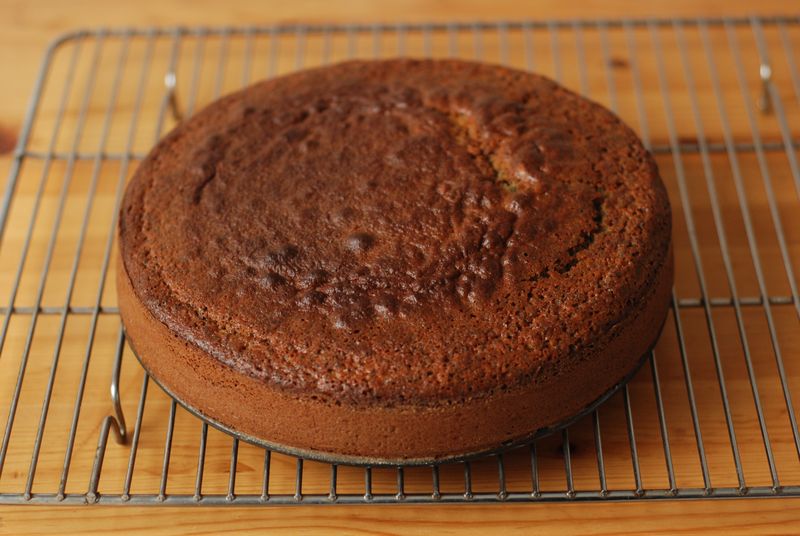 But really, that shouldn't stop you from making this cake. It's such a good cake. Especially when sliced thickly and served with milky tea in the afternoon. It's comforting and plain, but not boring and the crunch of the poppy seeds is a treat. In fact, when it cools off this weekend, I might even try to distract myself by baking it again so I can eat slices of it for comfort in the afternoons to come, soothing myself like I'll find myself surely soothing this baby just as soon as he gets here, right into my arms.

And who knows, maybe one day the smell of this cake baking will be something that our boy associates with home.

1. In a small mixing bowl, combine the poppy seeds and the hot milk. Set aside until needed. Heat the oven to 375ᵒF. Butter and flour a 9-inch spring form pan. Set aside.

2. In a medium-sized mixing bowl, whisk together the flour, baking powder, baking soda and salt.

3. Place the egg whites in the bowl of an electric stand mixer, fitted with the whisk attachment. Whisk on medium-high until firm but moist peaks form. Transfer the egg whites to a small mixing bowl. Using the same bowl as for the egg whites, but now using the paddle attachment, beat the butter and sugar on medium-high speed until light and fluffy, about 3 minutes. Add the vanilla, then beat in the egg yolks, adding one at a time and beating well after each addition. Scrape down the sides of the bowl with a rubber spatula, as needed.

4. Drain the milk from the poppy seeds, discarding the milk. Add the buttermilk and the drained poppy seeds to the batter. Beat until well combined, then again scrape down the sides of the bowl with the rubber spatula. Add the flour mixture to the batter, in thirds. Again scrape the bowl with the rubber spatula, making sure it’s all well mixed. Fold in about a quarter of the beaten egg whites with the spatula, then fold in the rest, mixing gently until just combined.

5. Transfer the batter into the prepared cake pan, smoothing the top with the rubber spatula. Bake until golden and firm, with the sides just beginning to pull away from the pan, about 40-50 minutes. Remove from the oven and place on a wire rack. Carefully run a sharp, thin knife along the sides of the cake, just against the pan, then gently remove the rim and allow the cake to cool to room temperature before slicing.