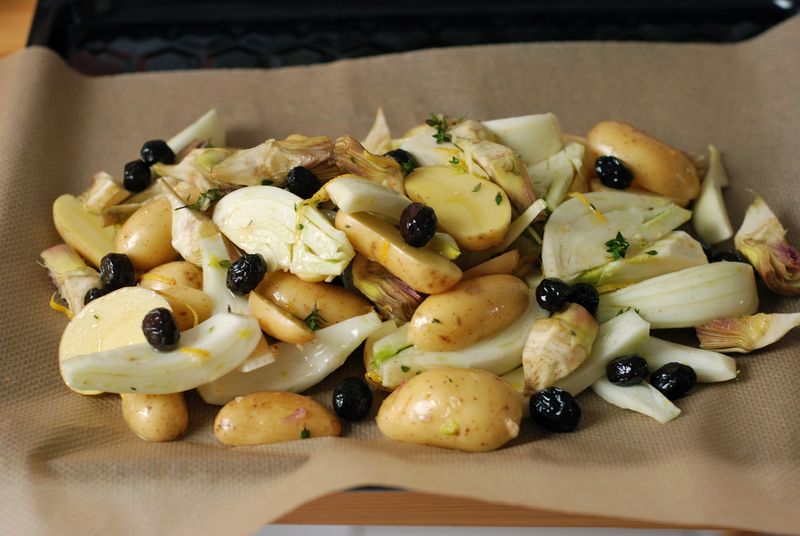 Artichokes. So delicious. Such a pain to clean. (And when I say "clean", you know I mean peel and whittle and acidulate and peel some more.) I used to think that as much as I loved eating artichokes, I was far, far too lazy to prepare and cook them myself. Whenever I saw artichokes at the market, I thought of my Sicilian uncle standing quietly in the kitchen for hours, whittling away at an enormous pile of them while the rest of us had a lazy breakfast in the other room, secure in the knowledge that because of his sacrifice, we would have a very fine lunch indeed.

So I put artichokes on that list of things I loved to eat but contented myself to enjoy on the few rare occasions a year when someone else did the cooking (the list, in case you're wondering, includes sea snails, homemade corn tortillas, strudel dough and breadcrumb passatelli).

Then, the other day, I was at my favorite green market that wraps all the way around a pretty square near my apartment and I came across a stand selling firm, little artichokes from Italy bundled up in bouquets of five apiece, so pretty that I could have displayed them in vases across my apartment instead of cooking them for dinner. I bought a bouquet, suckered in by their beauty.

And wouldn't you know, cleaning them was actually sort of easy. I prepped a bowl of cold water and squeezed two lemon halves into it, then dropped the halves into the water. I got out a paring knife and my sharpest chef's knife. I used my instinct to peel away just the right amount of outer leaves and then let the pressure of the artichoke's flesh under the knife dictate what I cut and what I didn't. And it was just right.

Isn't it funny how if you just try, sometimes, it turns out to be enough? 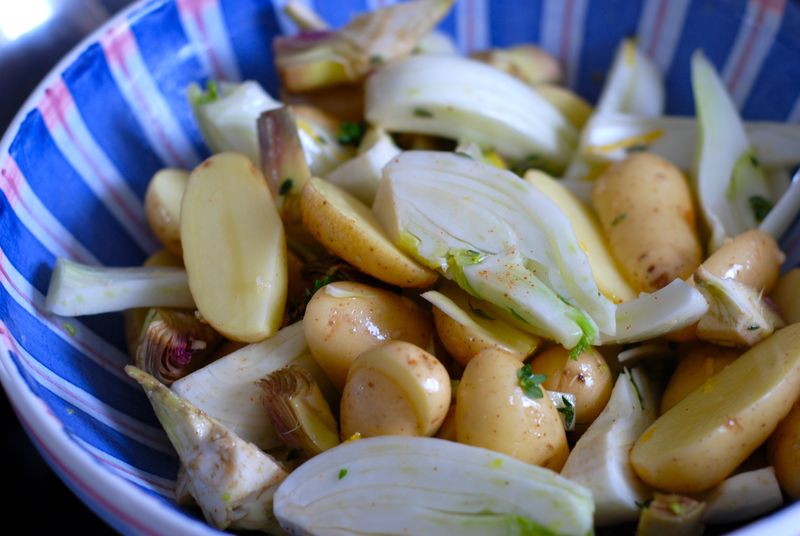 Every week now, I buy a bouquet of artichokes and clean them (getting faster each time) and every week I attempt to make this one simple braised dish that my mother learned to cook from my grandmother and that I cannot seem to get the grip of so far. It's frustrating because my mother and my grandmother are not, in my family, known for their cooking skills. In fact, they are often the butt of jokes doled out by the side of the family that married into a Sicilian clan whose cooking is the stuff of legends (their patience and sacrifice, too, see above). But because my mother is my mother, I love what she cooks.

The dish has you braise cubed potatoes and quartered artichokes in white wine and olive oil and salt, with parsley stirred in at the end, and when my mother makes it it tastes ambrosial, all creamy and complex and sweet-savory and comforting, and when I make it, it just kind of tastes like potatoes and artichokes. You know?

I keep plugging away at it, keep going back to the market, buying those artichokes and getting to work, but it keeps sort of being only just okay. However I've decided that instead of being frustrated by this, I should feel grateful that I've suddenly gotten so good at cleaning artichokes, the very act I'd always allowed to keep me from eating artichokes with any regularity because I thought it was so hard. 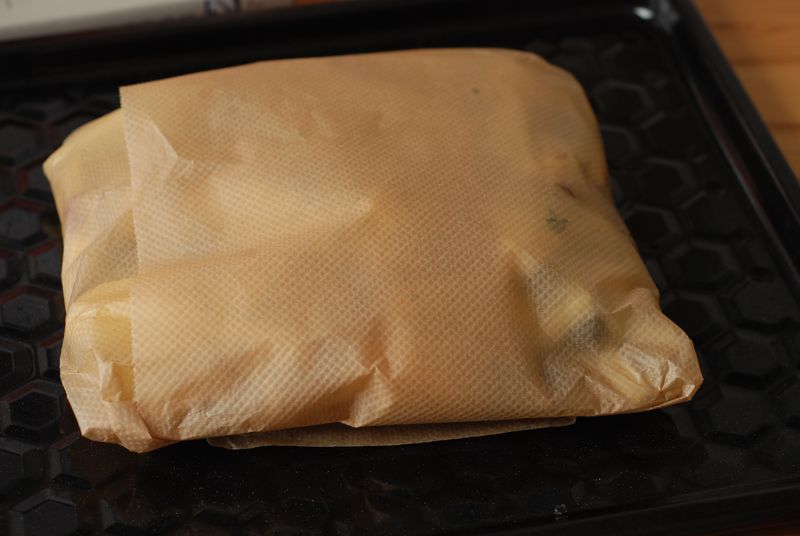 I really wish I could give you the braised artichoke recipe today, but I want to get it right before I do, and something tells me that's going to take a while (I promise that when I do, I'll also show you how I clean artichokes). Russ Parsons, however, just wrote about a very fine spring vegetable dish and it should tide you over just fine. I made it for lunch today and it filled the apartment with the most wonderful smells, garlic and thyme and lemon peel all steam-roasting together in the oven along with delicate artichokes, creamy fingerlings and sugary fennel.

This would be a lovely thing to serve alongside a roast chicken for dinner sometime or with a whole fish baked in salt. But we ate it for lunch, all by itself, and it was lovely. Just make to have plenty of flaky salt on hand - the dish needs salt to make it come alive.

You simply clean and quarter some artichokes, slice fennel into thinnish wedges, halve fingerlings and then season them with oil, salt, minced garlic, fresh thyme, lemon peel (Russ uses orange) and the faintest sprinkling of red pepper flakes. The vegetables get piled into a big piece of parchment or aluminum foil, pleated or folded together tightly, and baked in a hot oven for 45 minutes. The vegetables steam gently, keeping their shape and flavor integrity. The garlic and herbs and citrus peel infuse softly into the vegetables. Black olives popped on top sort of tie together the vaguely Provençal thing going on in the parchment.

This is sort of the opposite of a big sheet pan full of gutsy roasted vegetables, edges blistering, flavors packed and concentrated. It's far more delicate and restrained, but no less delicious. 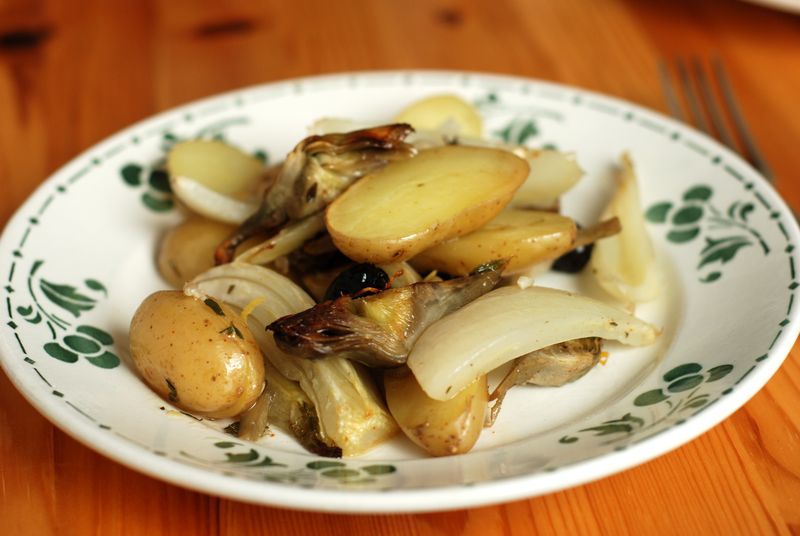 In the meantime, you'll find me in my kitchen, alternating between peeling and braising artichokes and trying my best to get over my fears and my indolence, lest they keep me from other wonderful things in life.

2. To prepare the artichokes: Fill a bowl with cool water and add the juice of 1 lemon. Hold an artichoke in one hand with the stem facing toward you and the tip facing away. Slowly turn the artichoke against the sharp edge of a knife while making an abbreviated sawing motion. (It's easier to control if you use the base of the knife rather than the tip.) You will begin to cut through the tough outer leaves; when you can discern the natural cone shape of the artichoke, adjust the knife to follow it. Keep trimming until you've cut away enough of the tough leaves so you can see only light green at the bases. Cut away about the top half-inch of the artichoke tip and dip the artichoke into the lemon water so the cut surfaces don't get discolored.

3. With a paring knife, trim away the very tip of the stem, then peel the stem and base of the artichoke, going from the tip to where the base meets the leaves. You'll have to do this at least five or six times to make it all the way around the artichoke. When you're done, there should be no dark green tough spots left, only pale green and ivory.

4. Cut each artichoke into lengthwise quarters, and if there is a fuzzy choke inside, cut just below the choke to the very base of the leaves and the choke will pop off, leaving a clean heart below. Place the artichoke in the lemon water and go on to the next artichoke.

5. To prepare the fennel, slice off the bottom of the bulb. Cut the bulb in quarters lengthwise and slice away most of the solid core at the center, leaving just enough to hold the bulb together. Cut each wedge in half again lengthwise to make 8 lengthwise wedges from each bulb.

6. Slice the potatoes in half lengthwise.

7. Transfer all of the vegetables into a mixing bowl. Add the minced garlic, cracked pepper flakes, lemon zest, the leaves of two to three sprigs of fresh thyme, the salt and olive oil and mix well with your hands to make sure the vegetables are all evenly covered with oil and flavorings.

8. Spread a rectangular sheet of parchment paper or aluminum foil on a work surface. You'll need a sheet at least 2 feet long and 1 foot wide. You can also bake this in 4 individual-serving-size packets.

9. Arrange the oiled vegetables in a low mound centered on half of the paper and top with the olives. Fold the other half of the paper over and fold and crumple the edges together to form a tight seal. Place the packet on a jellyroll pan and bake until the potatoes are tender, about 45 minutes.

10. Remove from the oven. If you wish, serve the vegetables in their baking paper, cutting an "X" in the top at the table. Be careful, as there will be hot steam. Sprinkle lightly with coarse salt to taste and serve immediately. 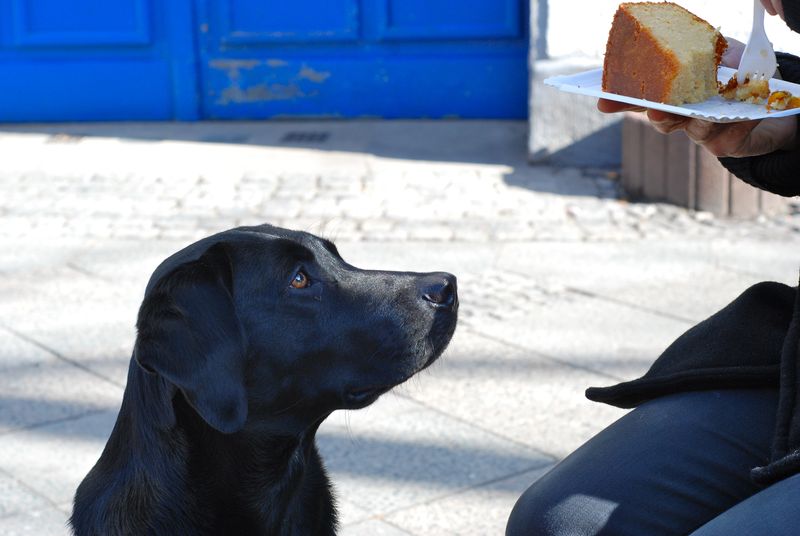 Isn't this pup fantastic? I met her a few weekends ago outside a cake shop so popular it had a line out the door. She couldn't stop gazing longingly at her owner's rustic orange cake, and I couldn't stop taking about a million photos of her sweet face.

Thank you for cheering me up, sweeties. The funk seems to have passed, largely, and I credit this to your comments, the fact that fresh rhubarb and white asparagus are finally at the market this week and the purchase of a ticket to New York in May. Problem solved! I plan on celebrating this and the full-fledged arrival of spring this weekend by wearing shoes without socks, stewing rhubarb and going to two dinner parties. Take that, funk.

How to season a wok (via Jane Lear).

Once I learned to roast Brussels sprouts, I never looked back. For an ambrosial-sounding recipe involving roasted Brussels sprouts and Sriracha sauce (swoon!), go to page 19 of this online food magazine (via Food 52).

The winter may be (almost) over, but Winnie's mail-order sources for interesting citrus fruits are fantastic. Bookmark them for this year's Christmas presents.

I still remember a peanut stew I ate for lunch at Hale & Hearty back when I was a starving editorial assistant (I was obsessed with that place). Something tells me Melissa's Senegalese peanut stew is probably a whole lot more delicious.

Do you need a few moments of soothing procrastination? Leaf through this virtual copy of the Seed Saver's Exchange and I guarantee bliss. Thereafter, also a mean lust for your own garden.

And for all of our worried minds, the most peaceful Tumblr ever (via The Catskill Kiwi).

Have a good weekend, everybody.